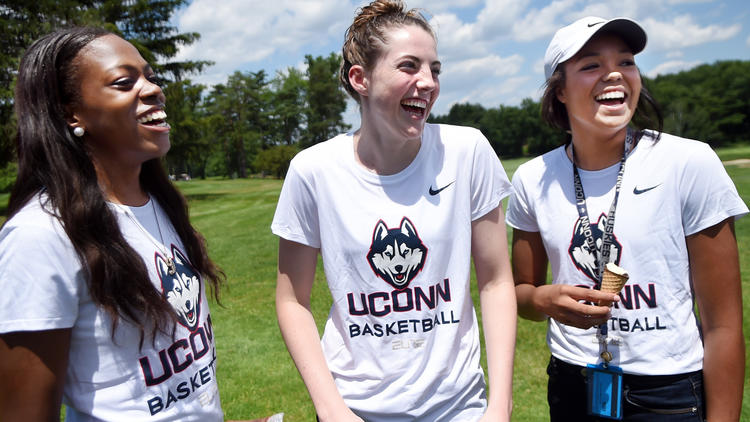 Geno I saw your athletics website released a Bio on each of the 3 recruits you signed for the 2015 class, I have not seen anything with thoughts from you on the kids. Would you care to share maybe a quick evaluation on Katie Lou, Napheesa & De’janae… and if there are any of your former players that they might remind you of ?

GENO  : ” I think its too early to tell, I think you’ll be able to get a better idea once they get here and you can see them everyday and see what their makeup is and see what they can do… every kid that we recruit is great , every kid that has ever signed with Connecticut is phenomenal , every kid that has decided to come to Connecticut is the best player I have ever seen and then that ends like October 15th cause they suck ( laughs ). Its like that every year because these kids that come out of  h.s.  all come out with big hype,  so you have to be careful that you don’t put too much stock in the new guys that are coming in. so all you can do is evaluate what is their potential , like what could they be if all things go well… and Katie Lou, we have one of the best shooters in the country from Mater Dei and that is where Kaleena  went to school.  I would say Katie Lou is a shooter that is at the same level that Kaleena is except that she is 6’3″, so that in of itself is something that very few people in the country are gonna have . “

” Napheesa Collier , you know her motor goes all the time, this kid is one of the most active, energetic , efficient players that I have seen in a long time. Very few h.s. kids you see block a shot at one end , then Offensive rebound at the other end and lay it up on the same possession. Most kids don’t work that hard, this kid is relentless. And then De’Jenae is kind of sneaky. You don’t notice her as much until all of a sudden she is up around the rim rebounding the ball , makes a good pass to someone cutting for a layup, knocking down a shot from 17-18 feet..and getting out in the passing lanes because she is so long .  They all have the potential to be really good players here, and all 3 of them are long which given what we have now and what those guys will bring could change the look of our team significantly for next year no question. “

Freshmen getting crash course on life at UConn

2017 AR Point Guard KYLEE COULTER is one to Follow.

Chrissy, you make me so proud. You're an amazing athlete but more importantly, you're an amazing young lady. I'm so fortunate to have you in my life. I pray that God continues to bless you and guide each and every step that you make. I love you so much.

Good to finally see info on the freshman #gouconn